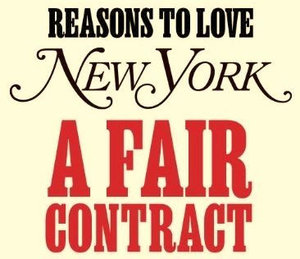 After more than 2.5 years of bargaining, New York Magazine Union has reached a deal with NY Mag and Vox management, with a groundbreaking contract that raises the bar for all news workers. Some of the union's biggest wins include a salary floor of $60,000 and immediate salary increases for more than half the shop, including raises of more than $20,000 for their most historically underpaid members, and yearly increases of between 2.75% and 3.25%.

"Without the support of our former colleagues, @NYMag readers, our @NYGuild @Newsguild  guides, and the direct action of our members, we wouldn’t have a strong contract to celebrate," the union said on Twitter. "Together we can work to make our workplace and our industry at large better." Read more about the transformative new contract in this thread and in the Wall Street Journal.