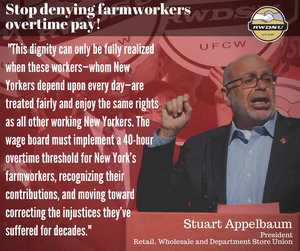 "Unlike most workers in the Empire State—and the rest of the country—New York’s farmworkers are currently denied overtime pay by New York law until they’ve worked 60 hours a week," writes Retail, Wholesale and Department Store Union (RWDSU) President Stuart Appelbaum in an OpEd published this week in the Amsterdam News. "This is a relic of Jim Crow-era labor laws that have historically treated farmworkers—the backbone of New York’s agriculture industry—as second-class workers. But with the proper action, that could soon change."

"As directed by the historic Farm Laborers Fair Labor Practices Act (which in 2019 for the first time gave the state’s farmworkers the right to organize into unions) the New York Department of Labor has convened a wage board to hold hearings and consider changing the state’s regulations to reduce the 60-hour overtime threshold for farmworkers. The wage board needs to recognize that farmworkers—who have proven to be truly essential workers during the ongoing COVID-19 pandemic—deserve overtime after 40 hours, which has been long established for almost every other worker in this country." Read the full OpEd here!