PSC-CUNY Launches Digital Campaign for a New Deal for CUNY 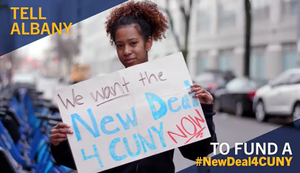 The Professional Staff Congress, which represents 30,000 faculty and staff at the City University of New York (CUNY) and the CUNY Research Foundation, has launched a digital ad campaign calling on New Yorkers to contact their elected officials to support and fund the New Deal for CUNY. The ads, which are set to run on multiple social and online media platforms in targeted legislative districts, feature shots of a December march where nearly a thousand New Yorkers rallied in Queens in support of the New Deal for CUNY. Learn more in the video below. Click here to send the letter.

Send a Letter to NY State Leaders. Tell them to Fund a New Deal for CUNY!