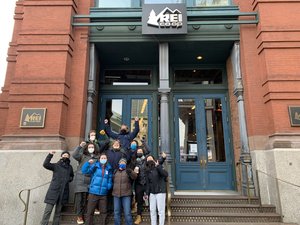 Employees at REI's flagship store in Soho filed for a union election last Friday, making the outdoor equipment and apparel retailer the latest prominent service-industry employer whose workers have sought to unionize. The 115 employees are seeking to be represented by the Retail, Wholesale and Department Store Union (RWDSU).

Like Starbucks, REI, a consumer cooperative made up of customers who buy lifetime memberships for $20, cultivates a progressive image. And yet, also like Starbucks, REI has failed to honor its workers' request for voluntary recognition of their union, instead choosing to begin morning shifts this Monday with managers reading aloud a series of talking points about the company’s stance against unionization, and sending its employees an email containing some of the same anti-union messaging.

“One thing I keep coming back to is the fact that REI prides itself on being a great workplace, a leader of the outdoors, but why is it that none of us are making a living wage?” Kate Denend, a camp sales specialist told Vice. “Why do you have to work 40 hours a week for 12 months to get health benefits? Why is there no guarantee of hours after the holiday season? These are very basic things that REI has gotten away with not doing, despite this facade of being a progressive, liberal company.” Read more in Vice and the New York Times, and use this handy form to tell REI what you think of union busting. (Photo: REI Union Soho)