“From ‘Third World’ to First Class: The New LaGuardia Airport” 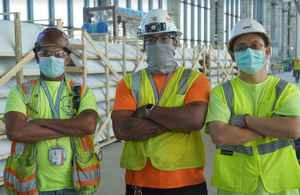 The new LaGuardia Airport in Queens is one of the most complicated construction projects in American history and it is being completed two years ahead of schedule and 100% union built.

"Building a modern, world-class airport while maintaining and operating the existing one — one that served New York but unfortunately had seen better days and needed an upgrade — was certainly a challenge. The IBEW and the NYC Building Trades have accomplished something extraordinary that will honor former Mayor Fiorello H. LaGuardia's legacy for decades to come," said Local Union No. 3, IBEW Business Manager and IBEW International Executive Council Chairman Christopher Erikson.

Approximately 2,400 professional and trade workers represented by more than two dozen unions have been working under a Project Labor Agreement. All the work there is scheduled to wrap up by 2025.

Read the full story as reported by the IBEW’s Electrical Worker Online. For a closer look, watch this video produced by Local Union No. 3, IBEW and UCOMM during construction of the new airport.