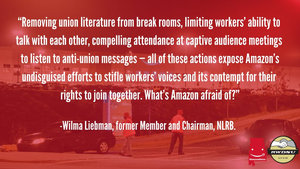 The Retail, Wholesale and Department Store Union (RWDSU) this week filed Unfair Labor Practice charges (ULPs) against Amazon claiming that it has engaged in misconduct during the re-run union election in Bessemer, Alabama. This is the second set of ULP charges by the Union, showing a continuance of the company’s conduct aimed at interfering with the right of employees to organize. This rerun election is the result of the company’s objectionable conduct under the National Labor Relations Act (NLRA) during the first election, conduct which the National Labor Relations Board (NLRB) concluded interfered with employees’ rights to a free and fair election. All the charges highlight examples of Amazon’s continued efforts to undermine and suppress workers’ right to a free and fair election. Despite the adversity, workers of the BAmazon Union continue to fight to ensure their democratic rights at work are respected and Amazon is held accountable for its outrageous behavior.

One of the filed ULPs seeks to challenge the current case-law precedent around captive audience meetings, which has for too long allowed employers to compel attendance to anti-union meetings. These aptly named “Captive-Audience” meetings are coercive and workers should have the right, as is already protected under the law in Section 8, to not engage in them. Read more here.