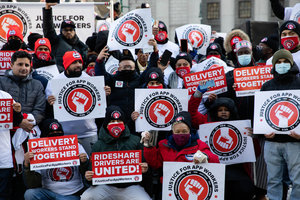 On Tuesday, drivers and and delivery workers from across the city kicked off the Justice for App Drivers Campaign with a rally in Foley Square in Manhattan. The workers have six core demands: living wages; a safe working environment; an end to unfair account deactivation; quality healthcare benefits; reliable, safe bathroom access; and the right to form a union.

Nine app-based worker advocacy organizations representing nearly 100,000 New York rideshare drivers and delivery workers, including Machinists Union affiliate the Independent Drivers Guild, have joined ranks to take on Uber, Lyft, and other big tech giants to win dignity at work. These are the working people who keep communities running, getting our neighbors what they need and where they need to go. At Tuesday's rally, bicycle and car delivery workers stood side-by-side with rideshare drivers as they railed against billionaire bosses in Silicon Valley, and called on all workers across the industry to mobilize together and join the fight. Watch coverage from CBS New York, learn more and join the movement at JusticeForAppWorkers.org, and watch their launch video here!