Help Workers on Strike in Brooklyn! 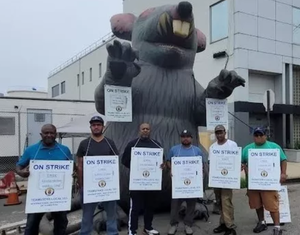 Teamsters Local 553 members, mostly immigrant workers, at an oil terminal in Brooklyn owned by billionaire John Catsimatidis have been on strike against Catsimatidis’ oil company, United Metro Energy Corporation, for almost 10 months. They do the work that earns Catsimatidis his millions, yet he refuses to pay them industry-standard wages – and now he has illegally permanently replaced them on the job.

These workers need financial help in order to keep their families fed and housed while they continue to fight for their jobs, and for respect and fair pay. They are essential workers who worked through the pandemic, then were told they didn't deserve to be paid the same as other oil workers in New York.  Any contributions we can make will help, donate here!

Help Workers on Strike in Brooklyn