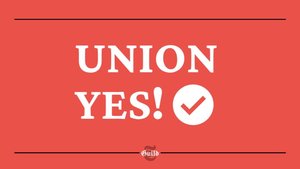 Internal documents and Slack messages obtained by the Guardian this week revealed that senior executives at the New York Times are heavily leaning on workers to vote no in a union election for more than 600 tech employees. Meredith Kopit Levien, the chief executive of the New York Times Company, wrote a memo circulated to staff titled “Why a Tech Union Isn’t Right for Us.” She emphasized the "relationship" between management and workers, baselessly alleging it would be disrupted by a union, and that the New York Times’ diversity, equity and inclusion goals would also be disrupted. If successful, the New York Times Tech Guild would form the largest bargaining unit of tech workers in the nation. The National Labor Relations Board previously rejected the New York Times’ attempt to stop the election.

Kopit Levien wrote: “This is an unproven experiment with permanent consequences.” New York Times editorial workers have been part of the same union the tech workers are organizing to join for 80 years. Read more in The Guardian.