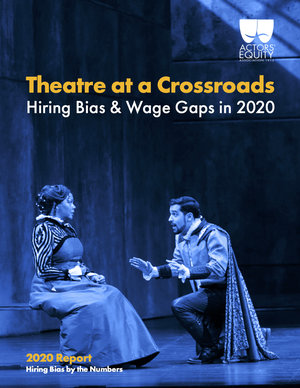 Actors’ Equity Association has released the union’s third diversity and inclusion hiring bias report, tracking the demographics of how its members are hired for acting and stage management work, and how much they were paid in the year 2020.

“2020 was obviously an outlier year; our industry was among the hardest hit by COVID, and work weeks were nowhere close to the norm. But 2020 was also the year in which theatrical leaders across the country loudly and collectively promised to do better, so we felt it was important to continue our work tracking hiring bias,” said Kate Shindle, president of Actors’ Equity Association. “We are disappointed by the realities of the data: while there was some incremental progress here and there in 2020, the theatre fell far short of fulfilling its promises of diverse and inclusive hiring."

Key findings for 2020 include: