Commemorating the 111th Anniversary of the Triangle Shirtwaist Factory Fire 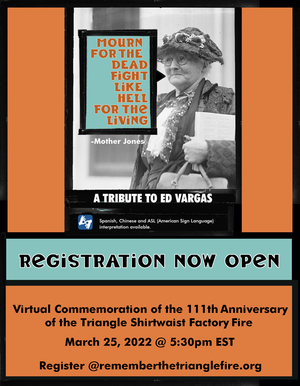 On March 25, 1911, 146 workers—mostly young, immigrant women—were killed in a horrific fire at the Triangle Shirtwaist Factory at Washington Place and Greene Street in lower Manhattan. Inadequate fire escapes, locked doors, and an overall disregard for worker safety contributed to the tragedy. Local and national outrage over the incident was the impetus for changes in labor and fire safety laws that continue to protect us today. More than a century later, it is crucial that we continue to stand together to protect the hard-fought gains of the labor movement, and to expand protections to include all workers.

Today at 5:30pm, the NYC CLC will join Workers United and the Remember the Triangle Fire Coalition for a virtual 111th Anniversary Commemoration of the fire. Frontline workers, organizers (including those from the 1982 Chinatown Garment Workers Strike), teachers, students, and many friends will honor the 146 garment workers killed in the fire as we stand at the same time with workers fighting for social and economic justice today. Workers organizing Starbucks shops here in New York and mine workers who have been on strike for almost a year in Alabama will be highlighted. The program will include music, poetry, and video presentations, and will end with a unique “reading of the names.”

This year’s event will also include a tribute to Ed Vargas, who passed away last fall and who many of you will remember as a longtime labor organizer, champion of working families and tenacious advocate for the creation of a permanent memorial to those lost in the Triangle Fire.

To access the Zoom feed for the event, please visit the Remember the Triangle Fire Coalition website at www.rememberthetrianglefire.org. Spanish, Chinese, and American Sign Language interpretation will be available.

On March 25, 1911, 146 workers—mostly young, immigrant women—were killed in a horrific fire at the Triangle Shirtwaist Factory at Washington Place and Greene Street in lower Manhattan.