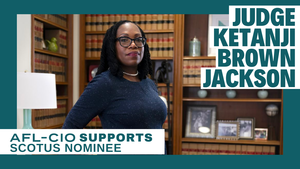 We are confident she will bring her clear commitment to equal justice and fairness to the highest court in the land. Being the first is never easy and Judge Jackson is doing what so many women have done before her, breaking barriers to ensure that she is not the last. Add your name to say you support Judge Ketanji Brown Jackson!