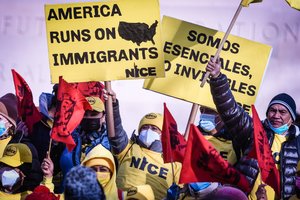 Nearly a year after New York approved a historic fund for undocumented immigrants and other non-traditional workers shut out of unemployment benefits and pandemic-spurred government relief, workers are pushing state officials for more money for the program to aid tens of thousands who have been left reeling.

On Tuesday morning, hundreds of deliveristas, domestic workers, taxi drivers, street vendors and construction workers marched over the Brooklyn and Manhattan bridge roadways simultaneously. They stopped traffic to call attention to their demand for $3 billion in additional money for the Excluded Workers Fund and the creation of a permanent unemployment insurance program.

“This commonsense bill will not only empower immigrant workers who make up the lion’s share of the nonunion construction workforce in New York," said Mike Prohaska, Business Manager of Laborers’ Local 79. "It will also close the gap between union and nonunion contractors, enabling undocumented workers to file for unemployment benefits, organize more freely on the job, and contribute more to our state’s economy and recovery after COVID.” Read more in Amsterdam News and THE CITY.