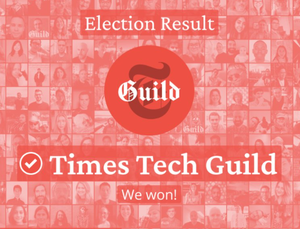 The National Labor Relations Board yesterday announced that, in a 404-88 blowout vote, New York Times tech workers have won their election for a union, after a year-long campaign that was met with aggressive union-busting tactics from management. 85% of the unit voted in the election.

The 600-member Times Tech Guild will be the largest union of tech workers with bargaining rights in the country. The unit includes software engineers, data analysts, project managers, product managers, and designers. The unit is represented by The NewsGuild of New York, part of NewsGuild-CWA, and affiliated with CODE-CWA.

“The National Labor Relations Board has confirmed what we have known to be true: support for a union is strong among tech workers at the New York Times," said the Times Tech Guild Organizing Committee in a statement. "With this election result, the hundreds of us who work on New York Times websites and apps will finally have a real seat at the table and a meaningful say in our pay, benefits, and working conditions. We are proud to have won the largest union of tech workers with bargaining rights in the country, and we hope today’s victory will inspire other workers across the tech industry to join us." Read more from the new union here, and check out additional coverage in HuffPo, Bloomberg, Poynter, and, yes, The New York Times.