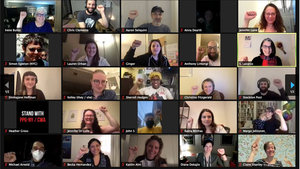 On Tuesday, members of the Post Production Guild-New York (PPG-NY), a union representing over 150 freelance post production workers in New York, partnering with the CWA, filed for a National Labor Relations Board (NLRB) election. The PPG-NY/CWA was forced to take the step after the Alliance of Motion Picture and Television Producers (AMPTP), the entertainment industry's official collective bargaining representative, repeatedly refused to voluntarily recognize the post production employees’ union despite the fact that virtually all of the workers have signed cards in favor of joining CWA.

Post production workers are part of a multi-faceted operation, bridging together all aspects of the filmmaking process. They play a vital role in filmmaking by shepherding the process of turning thousands of hours of raw footage into a polished final product including sound effects, color correction, music, visual effects, and other finished elements that moviegoers expect from the cinematic experience.

“We stand united and committed in our efforts to form a union, and we are ready to take this fight to the next stage,” said Chris Clemente, post production supervisor. “The AMPTP has chosen to take an anti-union position. We remain hopeful that they will recognize our union and value the contributions we make to the industry.” Read more here and in the Hollywood Reporter, and follow the new union on Twitter.