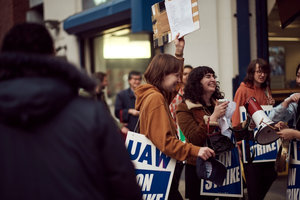 Anthology Film Workers including theater, office, administrative, projection and collections staff from across Anthology Film Archives last week held a one-day strike in support of a fair contract. AFA staff voted unanimously last year to unionize with UAW Local 2110 and are fighting now to address livable wages and fair working conditions for all in their first union contract. Bargaining began two months ago, and progress has been slow.

Members are demanding union security, including management dropping its proposal for an "open shop" which could erode the strength of the bargaining unit and threaten rights for future members, living wages which management has refused to prioritize despite raising over $10 million for a capital expansion project, and workplace protections including a robust grievance and arbitration process, just cause protections, layoff protections and severance pay. You can help by emailing management (John@anthologyfilmarchives.org) and asking them to negotiate fairly, and by following the workers' fight on Twitter and Instagram.