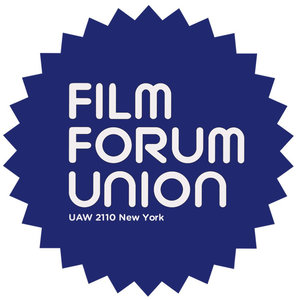 Workers at the legendary Greenwich Village movie house Film Forum filed a petition Tuesday for an NLRB election to join UAW Local 2110. The workers include full- and part-time workers in theaters, administration, facilities, programming and publicity.

"We join thousands of other workers in cultural and arts institutions in New York City who have unionized their workplaces," the Film Forum Union said in a statement on Instagram. "We look forward to voting YES for the right to bargain our wages, benefits, job security, and working conditions. Together, Film Forum employees will have a strong, democratic voice in the terms of our employment." Read more in Hyperallergic and and the Hollywood Reporter, and follow the Film Forum Union on Twitter, Instagram, and on their newly launched website.

We are the Union for Workers at Film Forum