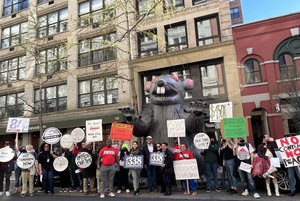 Members of the Housing Works Union held a worker speak-out across the street from Housing Works’ annual Design on a Dime fundraiser this week, highlighting the many issues that remain unresolved in contract negotiations. Since winning the vote to join the Retail, Wholesale and Department Store Union (RWDSU) on December 23, 2020, the Housing Works Union worker-led bargaining committee has sat across the table from management for nearly a year without significant movement by the employer on priority worker issues, such as strong wage increases that keep pace with costs of living, dedicated mental health leave to reduce burnout, group mental health counseling, and sustainable workloads.

This action is the latest in a string of workplace actions taken by the workers to demand a fair contract. Last week, members of the Housing Works Union hand delivered a petition signed by 405 members of the bargaining unit to Michael Clarke, SVP for Programs, in his office in Brooklyn, outlining workers’ demands that have yet to be agreed to at the bargaining table. Click here to follow the Housing Works Union's fight on Twitter!