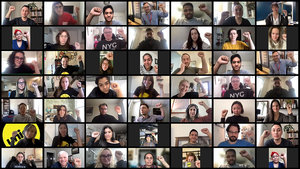 The union has been bargaining for over two years for their first collective bargaining agreement. In that time, members have engaged in collective, concerted, and escalating actions to move management toward a more just and serious bargaining process, including a one day walkout.

Last week, the company announced, under the threat of layoffs, that they would be offering “voluntary buyouts” to one-third of the unit, targeting reporters and editors who cover investigations, inequality, politics or science and have worked for the company for more than a year. Following the announcement, BuzzFeed News Union released a statement stating: “Once again, it’s clear BuzzFeed management is still learning a fundamental truth about their newsroom: now that we have our union, the era of them making unilateral decisions that affect our work and our lives is over.” Read more here and in The Daily Beast, and sign up here to stay updated on the status of contract talks and receive word when the unit calls a strike.