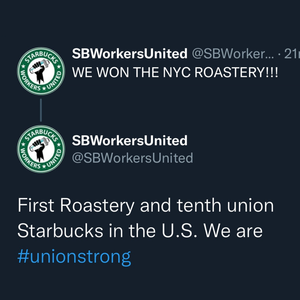 The Starbucks Reserve Roastery in NYC's Chelsea Market voted 46-36 to unionize on Friday, making history as the first flagship store to unionize with Starbucks Workers United, and the tenth unionized Starbucks store in the U.S. at the time of the vote (there are now 13!). The NYC store is one of only three Roastery locations in the country. In close collaboration with Starbucks partners (employees) the Workers United NY/NJ Regional Joint Board will now represent nearly 100 partners who work at the store.

"I'm proud of the culmination of our efforts to make our workplaces more democratic and equitable," said Starbucks partner of nine years Ley Kido. "Community is a value near and dear to my heart and I'm grateful and joyous to be in solidarity with my peers."

The partners at the Roastery filed for a union petition on February 10th, but Starbucks delayed the process giving themselves more time to run an anti-union campaign. The workers won their election despite a pervasive union-busting campaign that involved one-on-one employee meetings with management, group captive audience meetings conducted by management, anti-union materials being distributed by the store, employee write-ups for minor infractions like lateness that occurred many months prior, and a general air of hostility in the workplace. Read more here and check out coverage in Jacobin and CNBC.