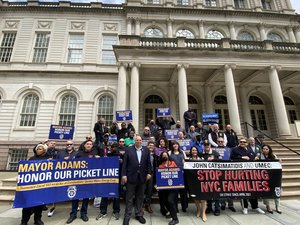 Essential workers marked one year on strike with a rally at City Hall yesterday, calling on Mayor Adams to stop doing business with their union-busting employer. United Metro Energy, owned by billionaire John Catsimatidis, has received $37.9 million from New York City over the last year, undermining the Teamsters Local 553 strike.

“Mayor Adams, the working class people of New York City need your help,” said Ivan Areizaga, a terminal operator who is among the striking workers at United Metro Energy. “When we went on strike, John Catsimatidis took away our health insurance and my son couldn't get his insulin. This is not the kind of company that New York City should be sending public dollars to.”

The immigrant workers have been on strike since April 2021. They provided gasoline, diesel, and heating oil to New York throughout the pandemic, while Catsimatidis paid them wages as much as 50% lower than at other city oil companies. Follow the workers' fight on Twitter!