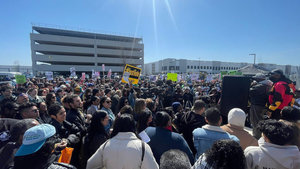 About 1,500 workers at an Amazon sorting center on Staten Island are eligible to vote this week in an election that could produce the second union at the company in the United States. Votes at the smaller facility, known as LDJ5, will be counted beginning next Monday. An Amazon Labor Union rally on Sunday brought in crowds of supporters including national leaders as well as representatives from labor unions across New York City.

Meanwhile, Amazon management is refusing to acknowledge the results of the election last month at JFK8, where more than 2,600 workers made history by voting yes. These workers won their right to be represented by the Amazon Labor Union. It’s been over a month and Amazon refuses to accept that fact. Click here to sign a petition telling Amazon management it must immediately recognize the Amazon Labor Union as the legal collective bargaining representative for the workers of JFK8, and begin negotiating a new contract with the ALU in good faith.