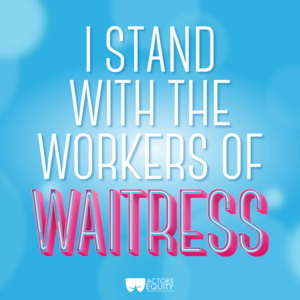 Actors’ Equity Association has opened a grievance against the licensors of the musical Waitress for double-breasting – profiting from union and non-union workers at the same time.

When Equity first approached the National Labor Relations Board concerning a vote to unionize the tour, the producers had performances planned through 2023. The production company, then informed the NLRB that the show was now only scheduled through June 2022, which would not allow enough time to hold a union vote. Equity has in response withdrawn its election petition. However, this is not the conclusion of Equity’s work to seek union protection for the workers of Waitress.

In the process related to the union election, Equity uncovered evidence that the licensors have a financial interest in the non-Equity production. This is in violation of the union recognition clause of Equity agreements to which the licensors are party through their membership in the Broadway League.

“It is obvious that these producers fear the will of their workers,” said Al Vincent, Jr., executive director of Actors’ Equity Association. “But this problem is much bigger than one employer... By pursuing legal action, we intend to get at this issue at its source.”

“The members of this company have been vocal that they want union representation,” said Stefanie Frey, Equity’s director of organizing & mobilization. “And this new pathway will make things right for them – and for hundreds of other stage managers and actors being denied the wages and workplace protections a union guarantees. When we prevail in this grievance process, and I am confident that we will, these workers will retroactively be placed on Equity contract for the entirety of the time the Equity Waitress has been contracted, and compensated in salary and benefits accordingly.”

Show your support for the touring company of Waitress unionizing!