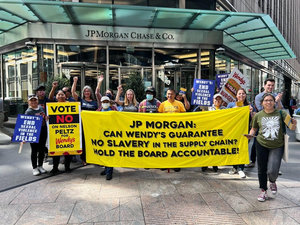 Coalition of Immokalee Workers farmworkers were joined in Midtown by NYC elected officials, national shareholder advocates and area supporters for a major rally and street theater performance outside the offices of Trian Partners (280 Park Avenue), Wendy’s largest institutional shareholder. They demanded that Wendy’s board be held accountable for its failure to join the award-winning Fair Food Program and address the modern-day slavery crisis in North American agriculture. The delegation also made visits to top Wendy's investors BlackRock and JP Morgan. Support for the VOTE NO campaign, led by Investor Advocates for Social Justice (IASJ) and Majority Action, has grown tremendously in the run-up to Wendy’s annual meeting later this month. Late Wednesday, we learned about some big news from influential players in the financial community:

These votes are a massive escalation in the growing wave of support by major investors for a shareholder-led initiative urging votes against Wendy’s Board Chair (and Trian CEO) Nelson Peltz and three other Directors in light of Wendy’s failure to adequately respond to a 2021 majority vote shareholder resolution on the protection of workers in its food supply chain. The 2021 resolution was supported by over 95% of Wendy’s shareholders. Read more here!