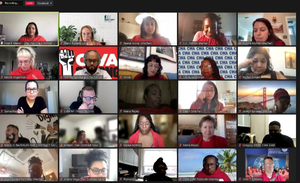 More than 150 staff from the National Domestic Workers Alliance (NDWA), other non-profit organizations, CWA Local 1180, politicians, and supporters joined together for a virtual Zoom rally in support of NDWA staff unable to secure a contract with management after an entire year.

NDWA staff workers unionized with Communications Workers of America Local 1180 in 2021. Both CWA District 1 and CWA Local 1180 have been diligently working with the NDWA staff bargaining committee to obtain a fair contract that fairly addresses salaries and benefits, and provides better protection due to illness.

Gloria Middleton, CWA Local 1180 President, said that a union contract would mean more stability and less turnover for NDWA staff. “We are thankful for the voluntary recognition on the part of management, but now they need to put their money where their mouths are and work on a fair and reasonable contract with the members,” she said. “Dragging this out for 12 months is not good-faith bargaining.”

The virtual rally, which also was broadcast live on the Local 1180 Facebook page was led by NDWA Bargaining Committee Member Yisel Maren and included speeches by several domestic workers, in Spanish, detailing problems they have had on the job with no contract.

CWA and Local 1180 pledged to members to stand with them and continue the fight until a contract is settled.