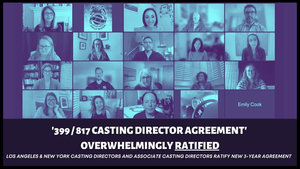 The main priority for the unit was to secure clean and concise language that addressed a weekly rate to protect members, specifically during episodic productions with drawn-out production schedules. For associate casting directors, the fight centered around securing a significant increase to wages.

“There’s a lot to feel good about in this agreement. It’s our sixth, and easily our best, round of bargaining. I’m happy for our casting members, and hats off to the leadership at Local 399,” said Tom O’Donnell, President of Teamsters Local 817, which represents almost 2,000 members in the Motion Picture Industry across New York City. Read more here.