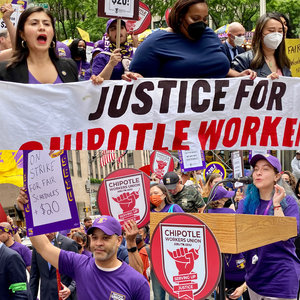 Several dozen Chipotle workers from across New York City rallied with elected officials and other supporters including the CLC in Midtown on Thursday after striking this week for a $20 minimum wage and better scheduling practices at the national fast food chain.

“Enough is enough,” Dashea Pringel, 35, told Gothamist ahead of Thursday’s rally. She’s worked at a Chipotle in Harlem for the last two and a half years and for half that time, and said her manager had ignored her requests to be made a full-time employee. “I'm a single mother who takes care of two boys. I have a whole apartment to pay for rent,” she said. “I'm just tired of living check to check, trying to keep food in my house.”

Several workers described having their hours suddenly cut, and being denied full-time employment, at the same time the company was hiring scores of new workers to cover additional shifts. Striking workers are asking for $20 starting pay and predictable full-time schedules for those who want them. Read more in Gothamist.