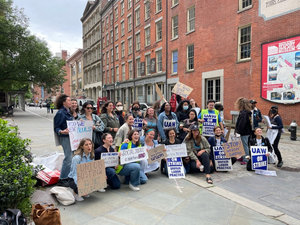 Teachers and staff at Blue School held a one-day strike on Tuesday, May 24, after the School, an independent school founded by Blue Man Group in Lower Manhattan, announced that it will refuse to recognize their union. The School’s refusal is in defiance of a bargaining order issued by the NLRB. The union, Local 2110 UAW was officially certified by the Labor Board on April 7, 2022, after numerous unsuccessful attempts by the School to halt unionization.

This is the latest development in more than a year-long effort by the School’s teachers and school workers to unionize, which started in December of 2020 after the School imposed a round of job and salary cuts. Blue School has retained Littler Mendelson, the same notorious anti-union law firm retained by Starbucks and Apple to prevent unionization.

“Blue School brands itself as offering a progressive approach to education. The curriculum we use even includes studies of activism and labor union history. It’s hypocritical for them to fight our union this way,” said Ari Bloom, Middle School Math Teacher. “We are striking because we want Blue School to stop abusing the legal process and come to the bargaining table.” Read more from the Blue School Union and from VICE.com.