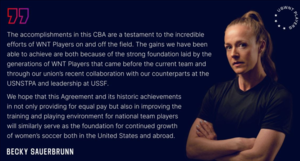 Contracts approved this week will guarantee, for the first time, that soccer players representing the United States men’s and women’s national teams will receive the same pay when competing in international matches and competitions. In addition to equal rates of pay for individual matches, the deals include a provision, believed to be the first of its kind, through which the teams will pool the unequal prize money payments U.S. Soccer receives from FIFA, world soccer’s governing body, for their participation in the quadrennial World Cup. Starting with the 2022 men’s tournament and the 2023 Women’s World Cup, that money will be shared equally among the members of both teams. The difference in compensation for men and women has been one of the most contentious issues in soccer in recent years, particularly after the American women won consecutive World Cup championships, in 2015 and 2019, and the men failed to qualify for the 2018 tournament. Read more in the NY Times.