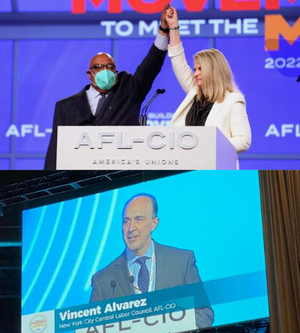 At the 29th AFL-CIO Constitutional Convention in Philadelphia this week, delegates elected Liz Shuler to serve as President of the federation of 57 unions and 12.5 million members. Shuler is the first woman to hold the office in the history of the labor federation. Delegates also elected Fred Redmond to serve as Secretary-Treasurer, the first African American to hold the office. Shuler delivered a call to action to organize, innovate and reshape the labor movement to meet the moment that the country is in as it continues to emerge from the COVID-19 pandemic. Shuler also announced the AFL-CIO’s moonshot to organize and activate 1 million workers throughout all 50 states to participate in the electoral process.

The Convention is the most important democratic event the federation hosts, where delegates meet every four years to chart the course for the labor movement’s future. Representatives from the federation’s unions come together to debate and vote on resolutions, attend educational sessions, mobilize for action, and elect federation leadership. Individual segments highlighted worker stories and organizing efforts, inspiring collaborations and game-changing initiatives. Attendees this year were also honored to be joined by President Joe Biden, Labor Secretary Marty Walsh, and Georgia Gubernatorial Nominee Stacey Abrams.

Officers and staff of the NYC CLC attended the Convention, and CLC President Vincent Alvarez spoke onstage in support of one of two new resolutions aimed at strengthening state, area, and local central bodies, both of which passed with unanimous support. Check out highlights from the convention here, and find more of the week's videos on the AFL-CIO YouTube channel.