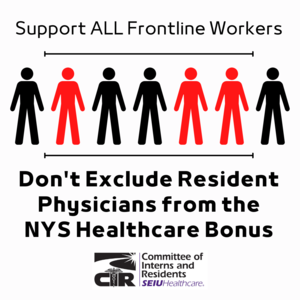 The FY 2023 New York State budget included up to $3000 bonuses for frontline healthcare workers to acknowledge their efforts and the need to incentivize healthcare workers to enter and stay in healthcare. However, resident physicians were not included despite being on the Covid frontlines since the beginning and very much in need of support and relief. For months, thousands of resident physicians and their supporters have been calling on Governor Hochul and the Budget Office to utilize the provisions in the budget legislation to expand eligibility and include resident physicians with no response. And on Thursday they had a day of action in which members and supporters joined together on social media to demand that residents not be excluded from the NY healthcare bonuses.

Resident physicians have made incredible sacrifices on the Covid frontlines just as all other healthcare workers have. They’re often working 80+ hours a week and essentially making less than minimum wage with an average of $250k in medical school debt. So why are they being excluded from much needed support? Follow and support CIR/SEIU's fight for fairness using the hashtag #NYincluderesidents.