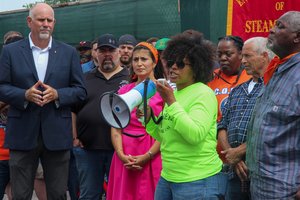 Members of Steamfitters Local 638, Sheet Metal Workers Local 28, Laborers Local 79, IBEW Local 3, Plumbers Local 1 and supporters are calling on legendary actor and native son of New York, Robert De Niro to ensure that the men and women working on the outside of the new $600 million-dollar, state-of-the-art studio being built by his studio production company, Wildflower LTD in Astoria are afforded the same union protections and benefits as entertainment professionals who will one day work inside. This project has been lauded by De Niro and developers for the thousands of union jobs it will provide to actors, stagehands, technicians, and others in the entertainment industry. But most of the workers actually building Wildflower Studio have no union protections, no access to fair wages, no healthcare or pensions, and none of the safety and professional standards that Building Trades workers bring to a construction project.