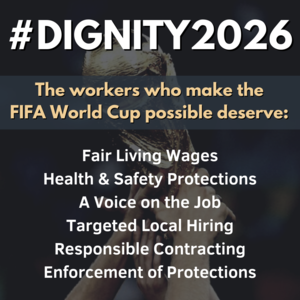 NYC-based worker rights organizations are celebrating along with fans the selection of the New York/New Jersey region yesterday to host games for the upcoming 2026 World Cup. With the games set to take place in the United States, Canada, and Mexico, local leaders allied with Dignity 2026 - Workers & Communities United for Rights at the World Cup look forward to an ongoing dialogue on human and worker rights as part of the planning process for 2026.

“We’re proud to be hosts to one of the world’s greatest sporting events, and even more excited about the potential of what it can do for our City,” said New York City Central Labor Council, AFL-CIO President Vincent Alvarez. “Now, we need to work together to ensure that these games are an economic boon for New York CIty residents, while guaranteeing workplace protections for New York City workers. The NYC Labor Movement looks forward to working with the New York/New Jersey host committee in order to ensure that this is a milestone for worker rights in this city.”

New York City worker rights groups are local allies of the international coalition Dignity 2026. The coalition of groups has been in contact with FIFA for months regarding the expectation for minimum standards. Read the NYC CLC's full press release here.