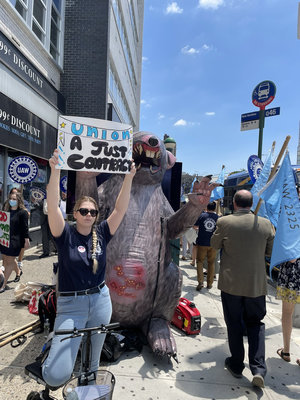 Over 100 ALAA-UAW Local 2325 members at Queens Defenders, accompanied by their union siblings from The Legal Aid Society, New York Legal Assistance Group, and 1199SEIU, rallied for an informational picket on Queens Boulevard, as they continue their 1.5 year struggle with Queens Defenders for a first contract. Queens Defenders staff have proudly provided excellent criminal defense representation to residents of Queens since 1996. In 2020, faced with poor management, arbitrary discipline, and favoritism, the staff at QD decided to form a union. Management’s response was to fire three of their colleagues in direct retaliation for unionizing. However, despite the retaliation they faced, the attorneys and social workers successfully won their union vote in early 2021.

Since 2021, ALAA has been locked in negotiations with QD over a first contract. Despite significant progress being made in negotiations, QD continues to propose increases in healthcare costs and refuses to address the root issues of massive staff turnover, as many staff have left QD to work at other public defender organizations like the Legal Aid Society, The Bronx Defenders, and New York County Defender Services. Follow the Queens Defenders Union's fight on Twitter.