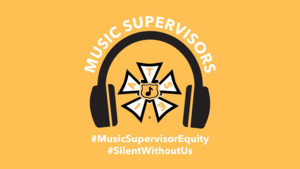 75% of film and television Music Supervisors signed authorization cards to form a union and become part of the International Alliance of Theatrical Stage Employees (IATSE), but on June 1, the Alliance of Motion Picture and Television Producers (AMPTP) indicated they will not voluntarily recognize it.

Music Supervisors are responsible for curating, securing/negotiating licensing for, and coordinating the use or creation of recorded music in service of a director’s or showrunner’s vision and budget. Music Supervisors facilitate some of the most beloved moments in film and television, but responsibilities have expanded, conditions have deteriorated, and pay has been stagnant and does not reflect the cultural impact of their work.

Music Supervisors have joined together to:

IATSE believes we have evidence Film and TV bosses may be unlawfully misclassifying these workers as ineligible for union representation and exempt from overtime laws. Workers are prepared to present that evidence to State and Federal bodies, including the National Labor Relations Board. However, those processes can take years, but Music Supervisors’ issues are urgent and demand action now. Click here to stand with us and sign this petition in solidarity!