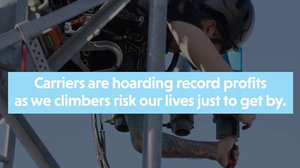 Wireless tower technicians organizing to form a union with CWA released a powerful video this week describing the struggles faced by workers in the industry and calling on tower climbers, everywhere, to come together, join the union, and take action. The video, featuring members of the Tower Climbers Union/CWA, provides a vivid window into the lives of tower climbers who take pride in the work they do connecting millions of Americans but often have to make the difficult choice between risking their safety and lives or taking on jobs under dangerous conditions.

The workers, who are constantly overworked and underpaid, also explain the difficulties of living paycheck to paycheck while executives from the large telecom corporations at the top continue to reel in exorbitant bonuses and record level profits. “They make you do the work in a short time, and really the big companies put everything in their pockets,” explains Carlos Vasquez-Uscanga, who has worked in the industry for 14 years.

The video also features Kathy Pierce, a mother who courageously shares the story of her son, Chad, who fell 180 feet to his death after expressing his reservations about the climbing conditions. “They said he should have never been up there that day. There was ice on top of the tower. He thought he's gonna lose his job and that's why he climbed. The carrier didn't do anything. They said they weren't responsible,” shares Pierce. She adds, “I just hope that the tower climbers go union in the memory of my son.” Read more here, and watch the full video here.