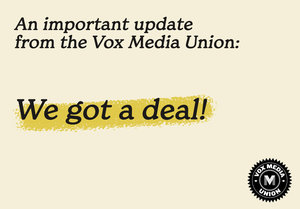 Vox Media’s 360-member bargaining unit yesterday near unanimously ratified its second collective bargaining agreement with the Writers Guild of America, East (WGAE). The 11th-hour agreement came after six months of bargaining that saw 95% of the unit sign a strike pledge, and the WGAE Council unanimously authorize a strike if a deal was not reached before the unit’s first contract expired on June 13. Vox Media management received nearly 7,000 letters of support from Guild members, union allies, and readers of the sites. In addition, the unit also took extensive action on social media and on the company’s Slacks to push for a fair deal.

In the end, the Vox Media Union won an industry-leading three-year agreement that will see the lowest-tiered employees base salary jump from $53,000 to $65,000, plus overtime, by the end of the agreement. In 2023 and 2024, all employees will receive raises, with 3.25% increases for people making under $100,000, and 2.75% for people making over $100,000. The agreement also includes equal pay language, a 10% cap for year-over-year premium increases, locks in at least 3% 401k match, develops a policy on critical healthcare that will include abortion access and gender-affirming care, and codifies WPATH trans healthcare. Further, the contract guarantees five months of parental leave, enhanced severance packages over the first contract with a 12 week minimum, elimination of the use of NDAs for harassment or discrimination, and new successorship protections. Read more here.