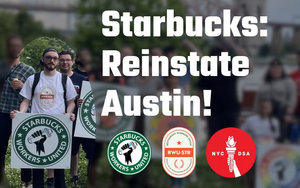 Last week, one of the Starbucks Workers United leaders who had recently led the successful unionization of his store in Astoria, Queens was unjustly fired by the company. This is the first firing of a union leader in downstate NY. Austin Locke, a Starbucks employee for almost six years, was fired July 5, just days after the store voted in favor of unionizing.

Austin had filed a claim of workplace violence, alleging that a supervisor had put hands on him to keep him out of a room where he was required to fill out the mandatory COVID symptom check-in before starting his duties for the day. Starbucks subsequently fired Austin for "making a false claim," despite a coworker confirming that she heard the supervisor admit to making physical contact.

“I’m one of the only people there coordinating,” Austin told QNS. “This was spurred by my actions. I think this is a clear incident of retaliation for a successful union effort at a Starbucks location. Starbucks has so many instances of illegal firings and harassment for workers who are unionizing and I think this is just another case of that.”

Starbucks Workers United is taking legal action, and a GoFundMe has been established to help Austin cover his expenses while he waits to be reinstated and receive backpay. Starbucks has been firing union leaders across the country, and we must make it clear to Starbucks that New York's leaders and the labor movement will not stand for this union-busting in our state. You can help by sharing this tweet from Ditmars Blvd Starbucks Workers United, and following their page for updates on upcoming rallies (including one on July 22) and other actions demanding that Starbucks reinstate Austin NOW.