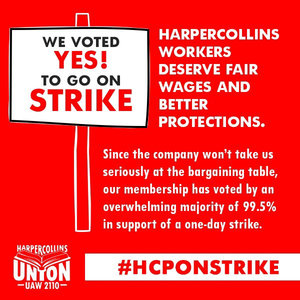 Unionized employees of HarperCollins Publishers have voted by 99% to authorize a strike if the publisher does not agree to a fair contract. Local 2110 of the UAW represents 250+ employees in editorial, sales, publicity, design, legal, and marketing departments.

The union is bargaining for higher pay, improved family leave benefits, a greater commitment to diversifying staff, and stronger union protection. The mainly women workers average $55,000 annually, with a starting salary of $45,000. Many employees cite pressure to work extra hours without additional compensation. The company, one of the top five book publishers globally, reported record-setting profits in the past two years. The union also cites the lack of racial and ethnic diversity at the company, attributing this to historically low wages and the lack of real commitment to diversifying.

“Our strike vote shows that the company needs to take our demands for better compensation and union rights seriously,” said Stephanie Guerdan, an Associate Editor in Children’s Books who has worked at HarperCollins since 2017. “Our members are prepared to strike for a fair contract if they have to.” Read more here and follow the workers on Twitter for an upcoming strike date announcement.