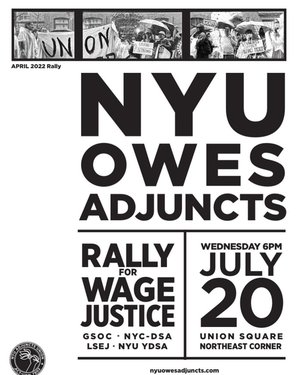 NYU Adjunct faculty members rallied for wage justice in Union Square Wednesday as their bargaining team gave NYU the union's initial wage demands proposal. ACT-UAW members have been bargaining a new labor contract for three months and ther current contract is about to expire on the first day of the fall semester. Meanwhile, inflation is at least 8% and wages will not increase to meet the higher cost of living without a fair new contract. Most adjuncts cannot afford NYU’s health plan for themselves, let alone their dependents and partners. By gathering the community together to publicly call for a living wage and better working conditions at NYU, members aim to leverage their collective power to win a landmark deal from the university administration.

"We are in a strong position in bargaining, the university cannot function without our contributions, but the administration is more likely to respond quickly to our demands with actions like these than only our words of frustration at the bargaining table,"ACT-UAW Local 7902 wrote on Facebook. "There is more energy and momentum in the labor movement than we have seen in decades, and the conspicuous wealth of NYU is as apparent as ever. Through the solidarity of our members, students, and communities, we will transform NYU into a fair, just and equitable workplace for all." Read more and check out photos of the rally on ACT-UAW's Facebook and Twitter pages!