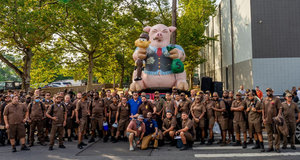 Teamsters at UPS held a rally Thursday after multiple workers were sent to the emergency room with heat exhaustion last week. The company refuses to install fans in trucks or adequate ventilation in sortation facilities. In Pasadena, CA, a 24-year-old worker died on the job due to high heat earlier this month.

While UPS refuses to buy even low-cost cooling devices, the company continues to invest in new technology to surveil workers on the job and automate work currently performed by employees. UPS workers are demanding safety, not surveillance. Read more in THE CITY, CNBC.com and FOX Business and follow Teamsters Local 804 on Twitter for updates!