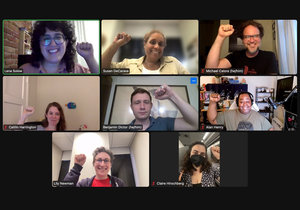 The WIRED union, a unit of The NewsGuild of New York, which represents more than 55 workers at the technology magazine, reached an agreement on a first contract with management late Monday night. The culmination of nearly 14 months of bargaining, the agreement allows the company to avoid a planned strike on Amazon Prime Days, July 12th and 13th, two of the most lucrative traffic days of the year for WIRED Magazine. More than 95% of the unit had signed on to walk off the job this morning.

“It shouldn’t have taken the threat of a strike for Condé leadership to finally reach a deal, but we’re so excited to have finally won this recognition and commitment from management,” said Lily Hay Newman, the WIRED Union Unit Chair. “We look forward to ratifying this contract and ensuring that WIRED is a viable, fulfilling place to work for years to come. WIRED workers have always deserved a real seat at the table and compensation that reflects the value of our work. All of our colleagues at Condé Nast deserve that.”

The WIRED Union will vote to ratify a final agreement in the coming weeks, after which contract details will be made available. Read more here.