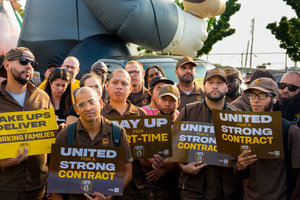 UPS workers across the country — including 14 locations in the New York region — rallied this week to launch the Teamsters contract campaign, a one-year effort to inform and mobilize members to win the strongest possible contract at UPS.

The campaign launch comes one year before the UPS National Master Agreement — the largest collective bargaining agreement in the U.S. — is set to expire on July 31, 2023. UPS Teamsters are united in the fight to end excessive overtime, eliminate the two-tier wage 22.4 job classification, increase part-time pay and the number of full-time jobs, improve job security for feeders and package drivers, address safety and health concerns around heat illness, and provide stronger protection against company harassment.

“The essential workers of UPS are ready to fight for the pay and working conditions that we deserve,” said Vinnie Perrone, President of New York’s Teamsters Local 804, International Union Trustee, and Eastern Region Package Director. “UPS is making record profits on our backs, but instead of putting that money into more full-time jobs and safety improvements, they are investing in worker surveillance and stock buybacks. We are united — drivers and inside workers, full-time and part-time — and we are going to win good jobs for the working class in this country.” Learn more at teamsters.nyc and watch coverage on News 12.

UPS Teamsters Rally in NYC to Kick Off Contract Fight