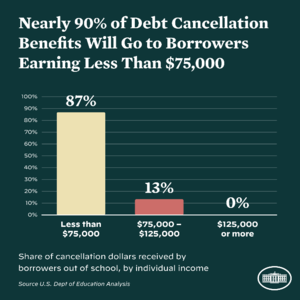 On Wednesday, President Biden announced a plan to wipe out significant amounts of student loan debt for tens of millions of Americans, by cancelling $10,000 in debt for those earning less than $125,000 per year and $20,000 for those who had received Pell grants for low-income families.

"Today’s White House decision to cancel $10,000 of student debt per borrower, $20k per Pell Grant recipient and to extend the payment pause is a critical step forward that will provide long overdue relief to the millions of Americans struggling with skyrocketing student loan debt," said AFL-CIO President Liz Shuler. "Since 1971, the cost of higher education has grown four times as fast as our wages. We know the groups who face the greatest challenges in repaying student loans. 97% of people with student debt are low- or middle-income. Women, particularly WOC, bear a disproportionate burden."

"Organized labor was built on the foundation of creating a pathway to the middle class for everyone, but skyrocketing student loan debt has become an insurmountable obstacle to achieving this goal. The student debt crisis does not disappear after today. The AFL-CIO will continue supporting investments to make higher education more affordable for all and keep fighting to #CancelNotCollect student debt in order to ensure this decision is a start, not an end."