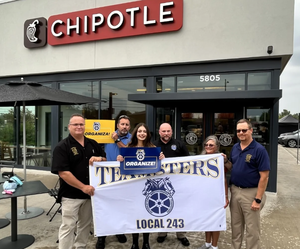 Unified workers at a Chipotle Mexican Grill in Lansing, Michigan, voted overwhelmingly on Thursday to form a union with the International Brotherhood of Teamsters, making it the first of the restaurant chain’s 3,000 locations to organize.

In addition to the security of a powerful Teamster contract, workers are forming a union to improve their work schedules, increase wages, and gain the respect from management that they’ve rightfully earned.

“Today’s victory is an amazing moment for our team that has worked so hard and spent many months organizing,” said Samantha Smith, 18, a crew member at Chipotle who has worked at the Lansing-area restaurant for more than two years. “We set out to show that our generation can make substantial change in this world and improve our working conditions by taking action collectively. What this vote shows is that workers are going to keep taking the fight to big corporations like Chipotle and demand the working conditions we deserve.” Read more here.