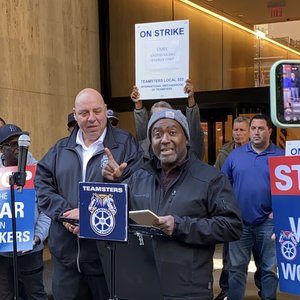 Workers at a John Catsimatidis-owned oil company who were fired after they went on strike last year must be offered their jobs back, according to a settlement between the firm and the National Labor Relations Board.

The workers at United Metro Energy’s Greenpoint facility, who have been on strike for over 400 days and are trying to win a contract with a Teamsters local, had levied numerous unfair labor practice accusations against the company. Among other claims, they alleged that United Metro had illegally replaced striking workers, threatened strikers' healthcare benefits, withheld wage increases and engaged in regressive bargaining. Read more here.

Workers at billionaire John Catsimatidis's United Metro Energy Corp have been on strike since April 19th.