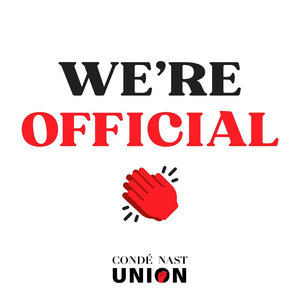 On Friday, Condé Union won their card count and is now officially recognized as a union. The era of “prestige paying the bills” is over.

"This card count is the formal recognition of our union, though we’ve been acting like one since day one," Condé Union said on Twitter." Our 500+ members and our 15K public petition supporters have helped us reach this milestone. After 5+ months of relentless organizing efforts, our card count showed that we reached a supermajority of Condé employees who have signed on to our union. We won in a landslide! Most excitingly, our permalancers who have been at Condé for over a year now have official union protections. The incredible @newyorkerunion paved the way for this win! But while winning a card check and being voluntarily recognized is a massive victory, it is also the beginning of the next chapter of our fight: bargaining."

"We’re ready to fight for job security, better benefits, and higher wages. We are finally joining our @newyorkerunion, @p4kunion, @ars_union, and @wiredunion colleagues in having a say in our working conditions. We’ve fought hard to get to this point, and every last employee deserves to celebrate our historic accomplishment of unionizing Condé Nast." Follow the Condé Union on Twitter to show your public support and help them win the best contract possible.