For the First Time in History, Minor League Baseball Players Have a Union 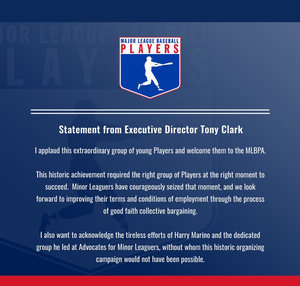 For the first time since Branch Rickey developed the modern farm system, minor league baseball players will be represented by a union. An independent arbiter found Wednesday that authorization cards submitted by minor league players this month yielded a majority in favor of unionizing under the supervision of the Major League Baseball Players Association. That means the minor league players are officially unionized, represented by the MLBPA. "Minor leaguers have gone more than a century without union representation. In a multibillion-dollar industry, there is no excuse to pay these players below the poverty line," said AFL-CIO President Liz Shuler. "Now, by joining together to use their collective voice at the bargaining table, the minor leaguers will be able to advocate for a union contract that will ensure a future with the good pay and benefits they deserve." Read more in The Nation, the Washington Post and Bleacher Report.