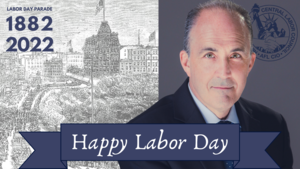 This year, the New York City Labor Movement will come together on Fifth Avenue for the first time since 2019, bringing back our annual Labor Day Parade with a spectacular show of solidarity and pride. And we'll do so on the 140th Anniversary of the first Labor Day Parade to ever take place in the United States, when more than 10,000 workers marched from New York City Hall to Union Square in 1882, twelve years before the day was declared a national holiday.

While many of us were already looking forward to the three-day weekend honoring working people, a new Gallup poll was released Tuesday confirming that 71% of Americans now approve of labor unions — the highest level since 1965. Another survey of non-union skilled and hourly workers released earlier this summer revealed that 70% of those workers would join a union at their current job, and about 40% said they were more likely to do so today than they were just three years ago. These polls confirm what workers across our nation are saying out loud: they want a voice at work, and they know that the best way to achieve that is through membership in a union.

None of this comes as any surprise from our vantage point here in New York City, where we've seen a surge in activism and organizing that's now spread across the nation and across all industries in the workforce, leading to historic worker victories and an increase in worker power. Even in the face of increasing anti-union intimidation and retaliation, often by corporations that profess to hold progressive values, workers have stood their ground and demanded a voice at the table and dignity at work. And we can see it in the numbers—the number of petitions filed at the National Labor Relations Board by workers to exercise their freedom to stand together in unions and negotiate for a fair return on their work is up 69% compared to last year.

We've always been proud of New York's long history as a Union Town. But we're just as proud of our work together today to create better lives for ourselves and our families, ensure safer workplaces, and build a stronger economy that works for ALL working people.

We hope that you'll join us on September 10th on Fifth Avenue to declare loudly that “When Workers Lead, Workers Rise.” On behalf of all of us at the NYC CLC, have a safe, healthy, and enjoyable Labor Day Weekend.