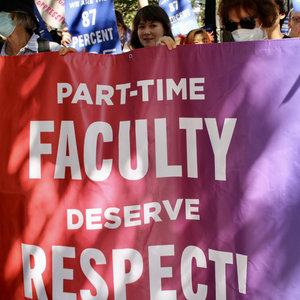 On Wednesday, unionized workers at the New School marched for respect! Jazz instructors at the New School first won a union contract with the help of Local 802 in 1998. in 1998. At the time, faculty had received only one raise in over 10 years and had no health benefits, pension or job security.  Now jazz faculty and other on-campus unions including members of New School Part-Time Faculty ACT-UAW Local 7902 and Teamsters Local 1205 are demanding that the New School bargain in good faith for new contracts that provide fair wages, reliable healthcare, stronger job security, real curriculum input, and more.

Union workers chose to build their careers at the New School due to its bold, progressive history, its stance against autocracy, and its deep roots in human dignity. But instead, they’ve encountered an employer that has strayed very far from the founders’ sentiments. The Rally for Respect spoke to the very philosophy on which the New School was founded — namely, the integrity of working people.